As a working photographer I reckon to have made at least 100 exposures a day for over 45 years, thats 16,500 days…thats gives as a minimum 1.6 million frames…I think this is on the low side so I will round the total up to 2 million photographs over the past 45 years…but how many actually count, how many made the final cut…and how many have stood the test of time. 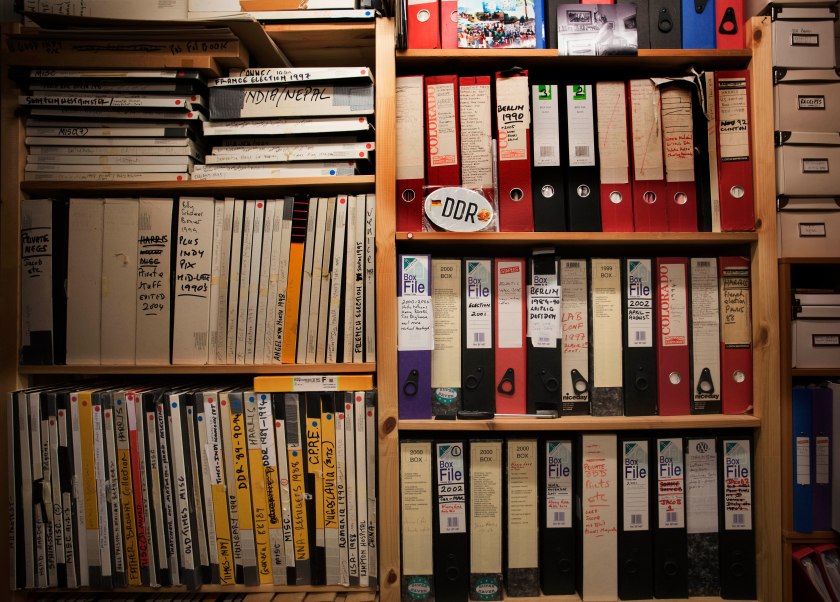 I started the formidable task of making sense of my archive some years back, I have negatives in pristine condition made in 1970 while still a trainee photographer and I have negatives developed against deadlines in hotel bathrooms while on the road that have already started to decompose.

For my book I edited and edited and then I edited again but I still had nearly 1500 individual strips of gelatine to scan and retouch in photoshop…some were beyond the pale so I resorted to copying bromide prints and in many cases the end result using a high end digital camera produced a better result than that that came out of a ‘press darkroom’ on the day.

Every frame scanned  had to be fully captioned and keyworded, every frame had to be extensively retouched. Scratches that ran the length of a strip of film known as ‘tramlines’ and were caused by over excessive and heavy handed application of a squeegee or a dirty bit of chamois leather used to dry the film quickly against a looming deadline. These scratches really tested my patience but I figured that I would only have to make a perfectly retouched scan once…so I kept at it…despite RSI and a shoulder pain caused by years of hunching over a computer keyboard. Thank you my little helpers in the shape of 500mg doses of Ibuprofen !

After 3 years of scanning and editing I had about 1300 perfect scans for my book. I put the sets of pictures into folders such as ‘USA Election’, ‘British Election’ and so forth but very quickly found that editing this number of images on a computer monitor was the way of madness. I then discovered a wonderful online cheap as chips printing service called photo box where for about 9p they would print a 7”x5” print, all in with no cropping and in a couple of days, delivered to my door.

I soon had piles of 7×5 prints  in my office so off to ‘Homebase’ for a couple of wallpaper decorating tables which gave me enough space to play a giant game of photographic patience. 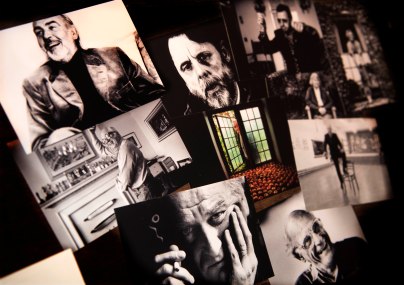 After spending weeks moving the thousand plus prints around and really not getting anywhere I raised the white flag of surrender and called in a professional picture editor in the shape of Glynn Griffiths. Glynn is a photographer, a sculptor, a picture editor and has been a really good friend of mine for the past thirty years. He understands my slightly left field way of seeing the world and has a wonderful memory for pictures of mine shot years ago. We consumed some wine and some rather excellent food at my house in north west Essex and got down to work. For three December days we froze and argued in my office and garage where the wallpaper pasting tables were covered with 7×5 index prints. We made an ‘A’ list and a ‘B’ list and juxtaposed images that just worked together….our overriding criteria being that the chosen picture had to be a belter, a ‘keeper’ as my friend, former National Geographic photographer Steve Raymer would say in the States.

After a day and evening we had the set down to just over 600…a way to go. By the end of the extended weekend in the deep winter of 2014 we had the selection down to 240 ‘art’ section images plus another 40 to drop into the text section.

We still didn’t know how many pages I could afford to print at the quality I required so I had to be prepared to let some of my favourite pictures go to the wall…a tough call…in the end I let Glynn be the arbiter…next year I’m going to get him to cut my roses back !

Most people can write a shopping list, many can write a postcard home and some can write a letter…but writing a book, that is something very different indeed.

At the beginning as I wrote in my earlier blog, the empty white page on the screen terrified me, but I blindly carried on, not really thinking that maybe, just maybe, one day my precious words would appear in print…in a book..between two hard covers and with my name on the front…wow ! 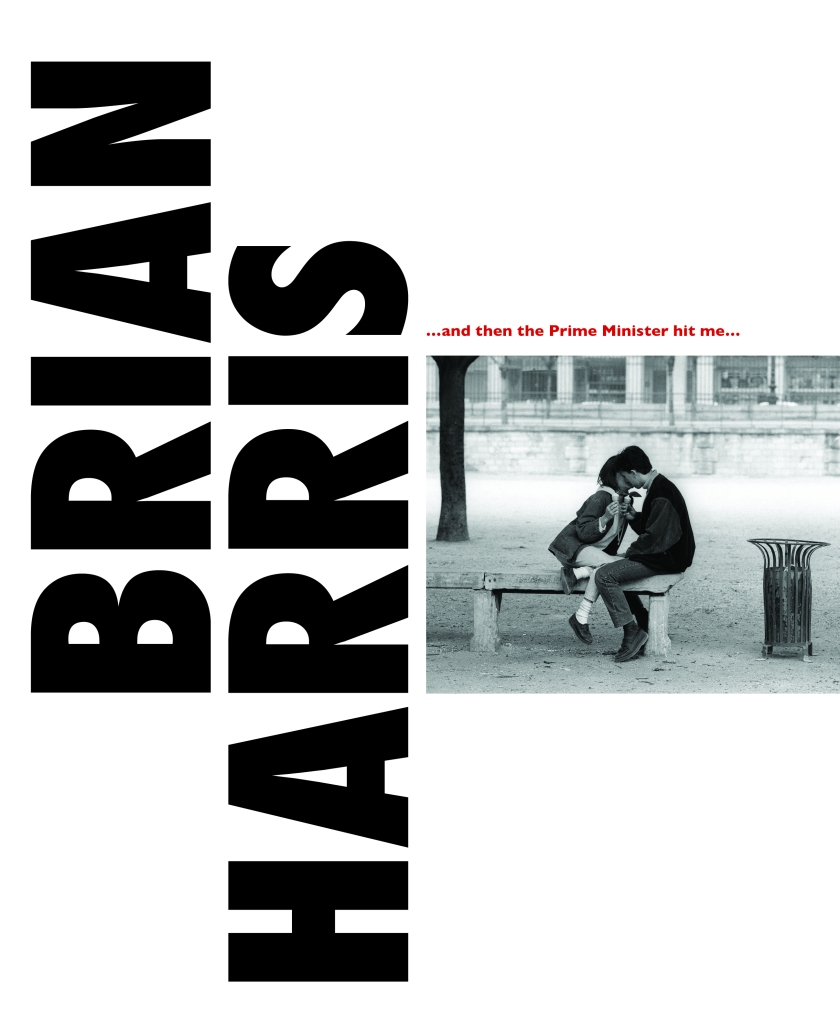 Over the years I have written a few pieces for various papers whilst employed as a staff photographer, a few hundred words, maybe a thousand…but not 75,000. My first article was a short photography and travel piece in The Times…I must say I was quite chuffed with that and I was paid extra to boot. On The Independent I turned out a few ‘Photography exhibition criticisms’ and wrote a regular opinion piece for the British Journal of Photography. I rather enjoyed the discipline of writing…even though my spelling was pretty darn awful.

After four years of two finger typing I realised that I may actually have the makings of a book. I had a beginning, a middle period and very much an end!

I showed a couple of chapters to my partner Nikki, who is also co-financing the end product, and said she had enjoyed what she had read, ’It’s definitely you’..i think that was a positive remark…or maybe she was just being kind.

I needed to get a professional writer’s opinion, someone who had worked as a journalist but had made the transition to become an author. I was chatting to my friend Clare Arron about my problem and she recommended a pal of hers who may be able to help out. Now, dumping 70,000 plus words in a raw form onto someone that you didn’t really know was a big ask…step unto the plate the very brave Wendy Holden. Wendy was well into writing her wonderful emotive book ‘Born Survivors’ but for the price of a case of wine she read my manuscript and made several ‘observations’.http://www.wendyholden.com/born-survivors.php

‘Get rid of that complete chapter’ was one of her gentler comments…’and get rid of that one as well’…’write from the heart, don’t just write a list of what you have done…take me with you…take me there…’

And so, the first of many rewrites. Rewriting is nowhere near as much fun as writing the first draft, but if this is to be published with my name on the cover, it had better be a belter.

I took on board most, nearly all of Wendy’s suggestions…even leaving out the chapter of getting roaring drunk in Bordeaux and having lovely Helen Mirren get me back to my hotel and point me to my room. Shame, as that’s quite fun, but as Wendy said… ‘it’s a photographers bar room story…you got pissed and an actress helped you out’, yup, that’s about it.

So, after several rewrites and some tough editing, I had a finished MS (can a manuscript ever be finished?).

Something I learned when working on ‘Remembered’, the history of the Commonwealth War Graves Commission – CWGC which I co-authored with Julie Summers in 2006 was the absolute importance of getting a top notch design team on board at the very early stages of putting a book together.http://www.amazon.co.uk/Remembered-History-Commonwealth-Graves-Commission/dp/1858943744

I contacted the urbane and ever helpful Hugh Merrell who published ‘Remembered’ and he recommended I get in touch with Professor Phil Cleaver at et-al design, based in Oxford who he had used on several projects.

Phil and I met and we got on straight away. He is clever and direct, but has some wonderfull quirks in his method of working. Phil has a tight team in Jennifer and Remi working for him – they are all very hands on.

We had a couple of meetings in his Oxford studio and he went away taking on board my ‘absolute wants’ and my ‘must haves’ and a few weeks later the cover of my book was born. Clean simple and bold…a classic piece of design and oh so very, very clever, see above.

Now to get some picture editing sorted out…that will be for next time.

‘…and then the Prime Minister hit me…’ My partner Nikki is partly to blame, for it was her who has pushed me to write down all my stories, my lectures, my history from over 45 years working as an editorial news photographer for the national press in the UK and turn them into an enjoyable illustrated read.

Writing an autobiographical book about ones life is like cleaning out the hard drive on a computer…and best done before my hard drive of a brain starts to fail and all that history, all those wonderful stories and self deprecating anecdotes disappear for ever.

The 75,000 plus words have taken over 5 years to write. It has been a full time job and even now I am finding more stories to add.

At the beginning I really had no idea where to start…a blank page, even on a computer screen, is quite frightening, and so, I started in the middle and worked back and forth as my life experiences revealed themselves to me, as if in a series of dreams. And yes, I did wake in the small hours on many occasions scrambling around in the dark looking for a note book to make a note to self to write up in the morning.

After a few months I got into the rhythm of writing for a few hours starting early each morning before stomping off for a fast walk to clear the head. I began to enjoy the process of establishing a specific period and writing up all I could remember. Sometimes in a humorous self deprecating way and sometimes deadly serious, but always I hope…interestingly.

Over the years I have always made a point of keeping all my note books and ephemera such as hotel brochures, maps and plane tickets from my world wide travels for various newspapers and magazines, a wonderful reserve of dates and places with which to give my grey matter a jolt every so often.

I have a collection of thousands of bromide prints and negatives and contact sheets (above) from which to work, these have been invaluable as I have noticed that the ‘picture of the day’ that was edited either by me whilst away on the story or back at base by a photo editor was NOT actually the best image. Very often pictures taken on the way to an event or story are far more interesting.

I intend to update this blog on a regular basis keeping you informed as to the latest position of the production my book, where we are at regarding proof reading, designing, picture editing and all the hundreds of things that you have no idea about…….